Under the bright lights of the studio, dapper broadcaster Simon King felt his confidence ebb away as he looked at himself in the monitor of his autocue.

Transfixed by his receding hairline he tried to deliver the country’s weather forecasts only to feel himself falter.

Struggling to overcome anxiety about his bald patches, he turned to MHR Clinic to restore his hair and meteorological mojo. 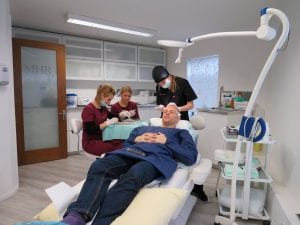 Broadcaster Simon King has cut a dashing figure ever since his days as a RAF officer.

His dynamic daily weather bulletins captivate UK viewers, but behind his slick delivery Simon was finding it more and more difficult to keep up a confident façade for the public.

He could be asked to read his weather forecasts from an autocue up to five times each morning as an integral part of the channel’s 24 hour rolling news bulletins.

But with every delivery he felt his confidence drain because day after day he was staring at his diminishing hairline and balding temples in the monitor of his autocue.

Left with only a wisp of hair on the front of his head, Simon decided he’d long passed the moment to do something about his hair loss. That’s when he got in contact with MHR Clinic.

Simon explained: “I’m a self-conscious person and seeing myself in my autocue every day made it worse. Over a couple of years I really noticed my hair thinning.

“To be honest it became more than a distraction. My hair loss knocked my confidence to the extent I sometimes felt anxious before delivering the weather.”

There’s a new confidence in me and I feel happier. Mrs. King has noticed it too. She says I have a spring in my step and that I look ‘damned handsome.’ 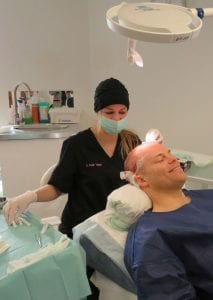 The 38 year-old also admitted feeling “jealous of guys with great hair” as his “hairline disappeared entirely”.

He revealed: “I became pre-occupied with other men’s hairlines and haircuts. Watching my forecasts back I imagined how I’d be with a full head of hair. I wasn’t ready to shave mine off. I feel too young at heart. So, I looked into hair transplants.”

The married father of two booked in for a consultation with our CEO Craig Henton and explained his dilemma. Craig quickly gauged the seriousness of his predicament from their conversation and responded by advising regular low level laser therapy sessions in conjunction with micro doses of the hair loss medicine finasteride.

Simon was also given DHT-blocking shampoos, herbal supplements and a specially formulated, strong and highly absorbent minoxidil lotion blended with active ingredients to immediately begin applying to his scalp each day. He was advised a hair transplant would also be necessary.

The weatherman followed his course of treatments like clockwork for six months. He saw his hair thicken and flourish as he approached the day for a FUE procedure.

When it arrived, the initial estimate of a 5000 hair transplant was downgraded to 3700 hairs because his medical treatments had worked so well. It meant he could save follicles in his donor area and the procedure he needed to rebuild his hairline would be completed in less time and for less cost.

Two weeks after his 3700 hair procedure, Simon returned to his weather work with a new crew cut and tough-guy appearance. The public’s response was phenomenal.

Viewers took to Twitter to laud his new look. Simon took to Instagram to show it off in more detail. His colleague Nicky Campbell called him on to Radio 5Live to talk about his hair transplant. The breakfast show’s switchboard lit up with callers wanting to congratulate Simon. And The Sun, The Mirror and the Daily Mail newspapers picked up on his incredible transformation in glowing terms.

Those articles can be read through this website’s Media Coverage page.

“I imagined how I’d be with a full head of hair. I wasn’t ready to shave mine off. I feel too young at heart. So, I looked into hair transplants.”

MHR Clinic’s comprehensive approach to tackling hair loss with bespoke hair restoration programmes has given Simon a new lease of life, as any person who follows his social media accounts will testify.

Alongside the photos he posted on Instagram shortly after his procedure, Simon wrote: “I know the jury is out with regard to hair transplants. ‘Do you shave it off, have the surgery or let it be?’

“Some people may call me vain. Others will say worse things, I’m sure. It is a personal decision and it wasn’t a difficult one for me. The truth is I’ve already noticed a difference in my demeanour.

“There’s a new confidence in me and I feel happier. Mrs King has noticed it too. She says I have a spring in my step and that I look ‘damned handsome’, which pretty much made my day.

“I’m now excited to see my hair grow back fully.”

Since his procedure, Simon’s new confidence and rugged look has spurred the all-weather action man to try out stand up paddle boarding, water skiing and power boating.

After embracing his new hairline and more youthful mind set, the sky is now the limit in more ways than one for broadcaster Simon King.