The Hamilton-Norwood Scale of Baldness & Your Hair Treatment

GENETIC hair loss in men happens gradually over a period of years.

It can be difficult to detect at first, creeping up on most males, until one day they realise they’re balding and shedding increasing amounts of hair.

When treated in the correct way and at the right time, it is possible to recover a full head of hair relatively quickly.

Each case of hair loss should be treated on an individual basis. At MHR Clinic, all of our clients receive a bespoke hair restoration plan tailored to their age, health, lifestyle and their degree of hair loss.

Hair loss progresses at different rates in different people. It is though accepted that baldness in men follows the same pattern.

A different combination of treatments is likely to be appropriate in order to recover a full head of hair at each stage of the Hamilton-Norwood Scale.

Here, we look at which treatments you are likely to require according to the stage of male pattern baldness you have reached. 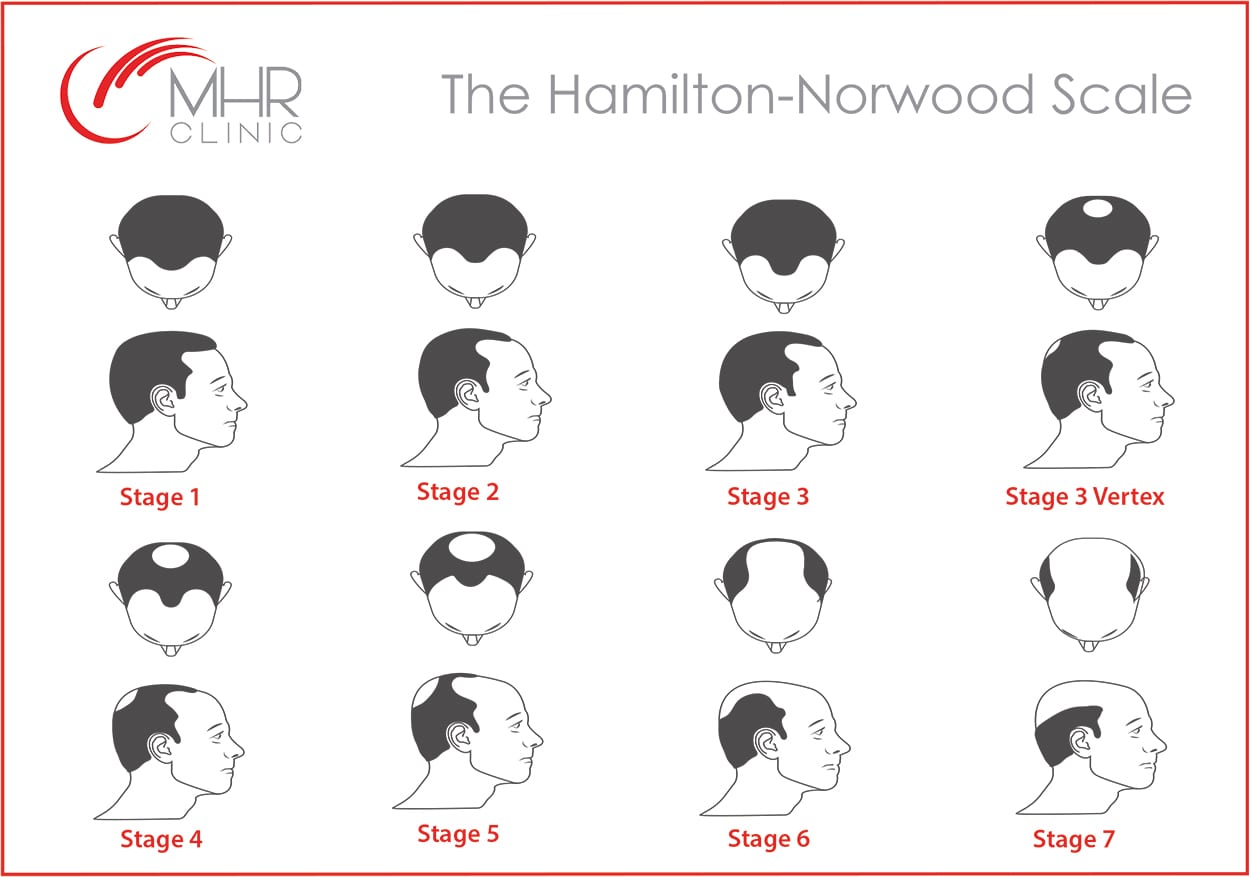 This early stage of hair loss is often missed by men. Balding is minimal during stage one and defined by a slight recession of the hairline above the temples. All men experience this hair loss to some degree as they get older, therefore age is an important factor in determining whether this hair loss is hereditary or universal.

If MHR Clinic suspects your male pattern baldness is hereditary, our trained consultants will carry out a DNA test to establish more about the hair loss you are likely to experience. Most commonly, at this stage, you will need an enzyme-inhibiting shampoo, hair health vitamins and organic herbal supplements with the possibility of a light course of low level laser therapy to maintain vitality. 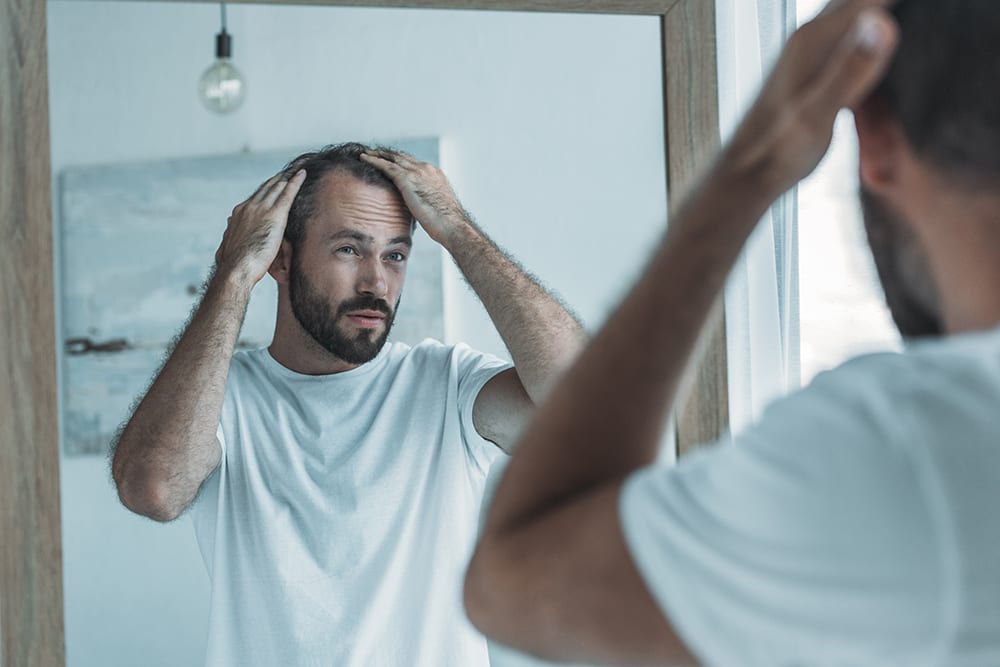 The second stage of male pattern baldness shows an increase in hair loss around the temples, resulting in a gentle ‘M’ shape to the hairline. The areas of hair loss are likely to be referred to as recessions. Hair in the middle of the forehead may begin the whither too. Hair loss may be reasonably unnoticeable, but it is important to act fast to prevent further balding.

MHR Clinic is likely to recommend a DNA test at this stage too, if one has not already been completed. The extent of your hair loss at stage two will determine the strength and balance of the Minoxidil and Azelaic acid ointment needed. Enzyme-inhibiting shampoos will also be recommended with low level laser therapy, hair health vitamins and organic herbal supplements.

During stage three of male pattern baldness, as defined by the Hamilton-Norwood Scale, recessions around the temples are now at their most distinct. Hair on the top of the scalp, towards the crown, may also be thinning. Men suffering this level of hair loss can easily be described as balding. At this stage of baldness, it is imperative to act quickly to restore a full head of hair.

A much higher concentration of Minoxidil and Azelaic acid ointment is now needed to increase blood flow to the hair follicles. MHR Clinic will likely advise the use of finasteride, a well-known hair loss medicine. A course of low level laser therapy to stimulate cell growth and blood flow is essential. PRP injections may also be advised. Shampoos, vitamins and herbal remedies will also be provided. 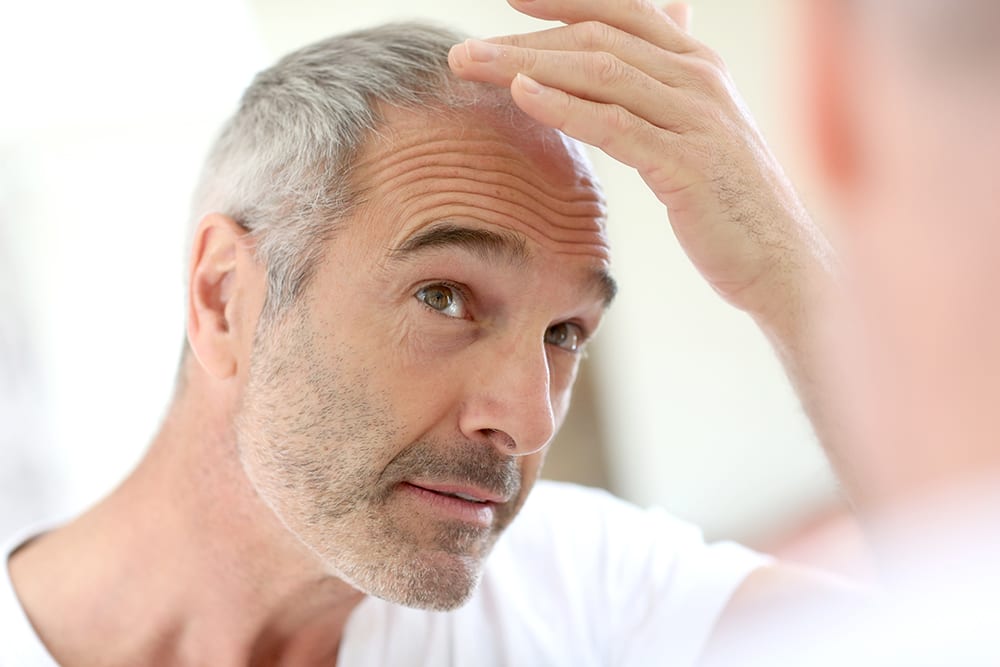 Large patches of scalp become evident as many more follicles die off during stage four of male pattern baldness. There is likely to be two key areas of hair loss – on the crown and across the front of the head. A strip of hair divides the two. If hair restoration is not undertaken now, a hair transplant will become inevitable.

MHR Clinic is likely to offer its maximum strength Minoxidil and Azelaic acid ointment from this stage of hair loss onwards. Finasteride will be recommended in accordance with a health assessment. Low level laser therapy will be advised to boost the performance of your medicines. PRP injections will also be on the table. Shampoos, vitamins and herbal remedies will be provided.

There is only a small covering of hair on the scalp when a man reaches stage five of baldness. Typically a lone patch of hair at the front of the scalp prevents the appearance of a horse-shoe shaped hairline. While hair may still be thick around the sides and back, these areas will begin to recede next, leaving less donor follicles available for transplant down the line.

A hair transplant will almost certainly be necessary at this stage of hair loss. Medicines will not be enough alone to halt the shedding of hair. It is likely that anywhere between 1500 and 2000 grafts will be needed to cover the area of baldness. Finasteride, Minoxidil lotions, low level laser therapy, vitamins and herbal supplements will also be advised in order to bring back a full head of hair.

Baldness around the temples and across the front hairline is now joined to baldness on the crown of the head. A horse-shoe shaped hairline is evident and hair is further receding at the sides. Stage six is the last chance to regain anything like a full head of hair, although MHR Clinic is often successful in achieving good results for men who have reached this level of hair loss.

By now almost all follicles on the top of the head have died and cannot be revived with medication or laser therapy. Surgery is the staple of reversing stage six hair loss in men. A hair transplant procedure of between 2500 and 5000 grafts will be necessary. Medicines, laser and lotions can still be used to revive any last dying follicles and stabilise the newly transplanted ones.

Men who reach stage seven of the Hamilton-Norwood Scale are considered to be bald. Hair only remains in short supply at the sides and back of the head. It may also be finer by now and the chance to extract enough donors for a transplant is slight. If treatment hasn’t been started by now there are few ways to achieve the growth of natural hair on the top of the head.

While some surgery may be possible, it will not be able to provide you with a full head of hair. It can be coupled with scalp micropigmentation (SMP) to offer a denser appearing head of hair. SMP may be provided as a standalone treatment to simulate the look of a shaven head of hair. Outside of surgery or SMP, our clients may wish to explore the possibility of a hair system which appear real.